Joachim Sieper is professor emeritus of rheumatology at the Benjamin Franklin Campus of the Charité Berlin. In the first part of the interview with online editor Eva Reidemeister, he talked about the challenges of diagnosing axial spondyloarthritis. And about why we don’t say “Bechterew’s disease” anymore.

But to date, the disease is not curable. So far, therapy has only been able to alleviate the symptoms and curb the progression of the disease, even to the point of complete freedom from symptoms. There is still a lot to be done in terms of treatment, research and the training of medical students. Learn more here.

Eva Reidemeister: With regard to spondyloarthritis, which areas need further researching? We have touched on this topic briefly the last time: The inflammatory processes of the disease are not yet fully understood.

Joachim Sieper: This is generally true for chronic diseases. One first has to understand the origin, the pathogenesis, in order to then offer a cure. And although we have developed very good therapies over the last twenty years, which we are increasingly using and which have helped the patients a lot, but usually there is a relapse if the therapy is interrupted, which is why we only expect good relief, but do not speak of a cure.

Understanding a disease is an essential step in offering a cure. We are not there yet. We know there is a very strong genetic component. So the genes account for 80 % to 90 % of the development of the disease. Then there are environmental factors such as bacteria. Salmonella, just as an example. These can also trigger something like that. Or if one has chronic intestinal inflammation, as in Crohn’s disease, then the intestinal mucosa is damaged and this is why the immune system can “see” the bacteria in the intestine. We know about the factors “immune system” and “bacteria”, but we still don’t really understand what ultimately triggers the disease, nor how to stop this particular process. This is another very important aspect for research. 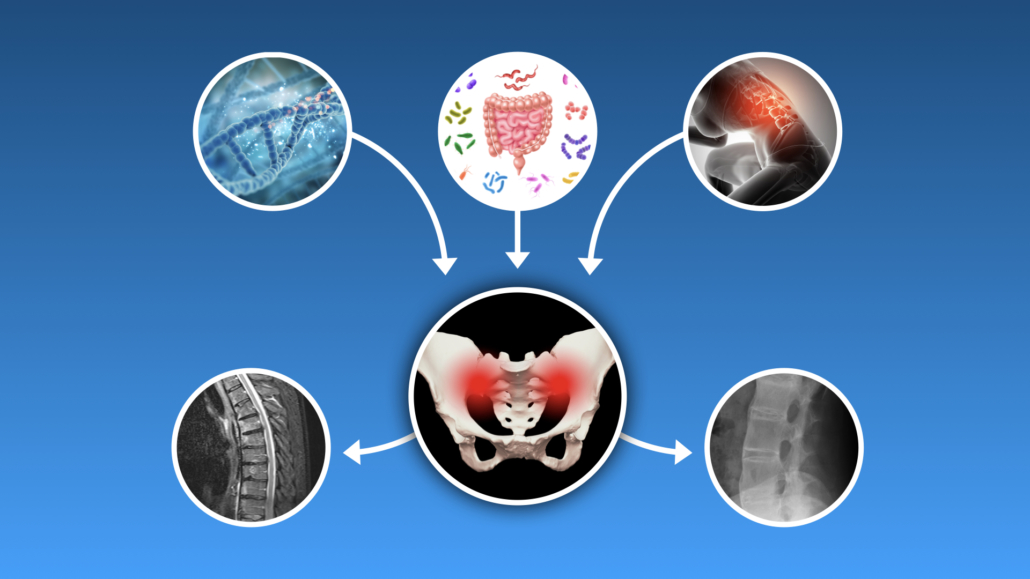 Genetics, intestinal health and mechanics as possible factors leading to inflammation, first in the sacroiliac joints, later in the spine.

We know about the therapies that we have that they usually work better when the diagnosis is made early on. If the patients have been ill for a long time, then it is difficult to interrupt the inflammatory process, or they can then have additional pain due to muscle tension due to unequal load bearing when walking — and this is not that easy to distinguish.

So the early diagnosis is a very important step in order to see even higher and lasting therapeutic success. And for early diagnosis, imaging is simply essential. Right now, the MRI scan is recommended here. Imaging will certainly continue to develop. We still have patients who we think are sick, yet the MRI does not show any clear findings, because the sensitivity of the MRI scan is probably not 100 % either.

We’re still “missing” patients. The keyword “deep learning” comes to mind here, which is about developing programs which can automatically diagnose imaging. That would also help the rheumatologist enormously if it had a relatively good informative value. I think there are important research questions still to be found.

We briefly mentioned last time that it is a disease of young people. It usually starts in the third decade of life between 20 and 30. So if one is in the middle of life — hence the importance of early diagnosis. And we generally say that if patients have symptoms when they’re older than 45, it’s unlikely that axial spondyloarthritis is the cause. In a nutshell, one can say: the younger, the more likely.

In terms of age, it is not known exactly why … and the same applies to the phenomenon of bone destruction or x-ray changes, which for some reason tend to occur earlier in men than in women — and also a little more often. That’s why people used to think it was a male disease because they developed the ossifications. But if we use the MRI scan, we see that about the same number of women are affected in the inflammatory phase. But for reasons unknown, women develop these ossifications later or perhaps not at all.

ER: This means that the symptoms differ between the sexes.

JS: No, the symptoms are the same. That is, they have similar levels of pain, general unwellness or fatigue, stiffness, but the bone destruction, which sometimes doesn’t play that big of a role in symptoms, seems to be different.

ER: I see. We’ve always talked about the MRI now, but what about computed tomography (CT)? Is it a question of cost that people tend to opt for MRI, or is it really about seeing things better on MRI?

JS: We have more or less 3 imaging methods. X-ray is still inexpensive and still important in the official standards. That’s just how it evolved historically. An X-ray image is not easy to interpret, as it doesn’t show slices, but is rather a  “summation image” of all the bones of the pelvis making it difficult for the untrained eye. Therefore, if you ask experts, there is a high discrepancy in interpretation. Yes, the X-ray is used because it is cheap and part of many guidelines, but for the future it should disappear. 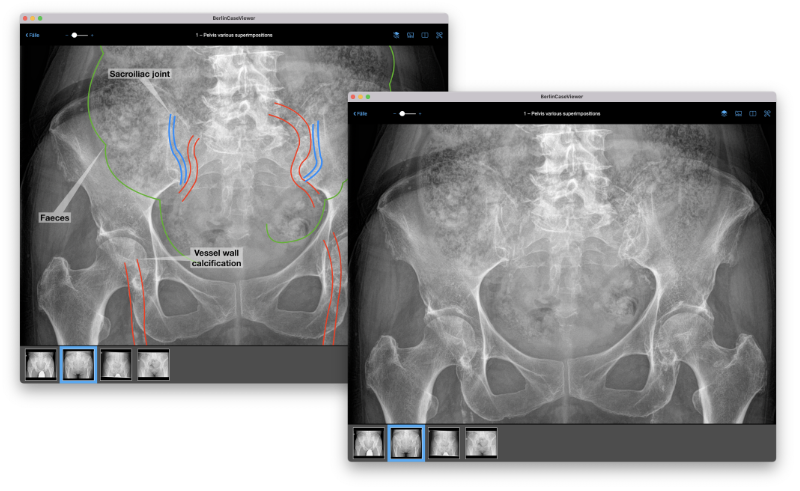 X-ray of the pelvis demonstrating various types of superimpositions

X-rays show no inflammation, only bone destruction. In this regard [note: related to the summation image], the CT is clearly superior to the X-ray because it does produce and show slices. Yet the CT does not show any inflammation, only bone damage, but not the inflammation within the bone. That’s why CT is always an option if you’re not sure about X-rays, but it doesn’t play that big of a role due to radiation exposure. Because the radiation exposure is relatively high. Still, we then use low-dose CT.

Our radiologists Torsten Diekhoff and Kay Hermann scientifically examine such techniques, and the radiation exposure apparently is similar to that of X-rays now. The question is: Can the structural changes also be detected on the MRI findings? That seems to be the case. We have also examined this with Kay Hermann and Torsten Diekhoff from the radiology department at the Charité. And the T1 sequence on the MRI scan probably better detects the structural changes, the erosions and the ossifications in the sacroiliac joints than the X-ray.

In this respect, it could be possible, if costs are not the decisive factor, that we only do MRI. We look at one sequence that shows us the inflammation, and then we look at another sequence that then shows us the structural damage, and then, when that’s clear, we don’t need any other procedures.

If we still have doubts, we can actually do a low-dose CT because it is even more informative than MRI in terms of the structural changes, but with more radiation exposure. This means that in the future, X-rays will only be used where there are cost problems, simply because it is cheap and relatively easy to utilize.

ER: From diagnosis to treatment: Because we also talked about comorbidities such as psoriasis or Crohn’s disease — does the presence of such diseases also change the treatment from a rheumatological point of view? How personal is the therapy plan?

JS: Well, we start with nonsteroidal anti-inflammatory drugs (NSAIDs) like diclofenac or ibuprofen, regardless of whether the other diseases are present or not. The next step is then the biologicals. That’s where we have the most experience with TNF-alpha blockers. These act on the rheumatic manifestations, i.e. the inflammation in the pelvis and spine. But they also work well for psoriasis and Crohn’s disease, and also for iris inflammation (uveitis).

So when something like this is present, we have certain differentiations. Traditionally, we didn’t think about it that much because the TNF-alpha blockers work everywhere. But with the newer substances, there are differentiations, and the presence or absence of these extra-rheumatic manifestations does play a role.

ER: Aside from the medications to be prescribed, is there anything patients can do themselves to keep the disease in check?

JS: With this disease it has been important for a hundred years now that one moves, that one does physiotherapy regularly, preferably twice a day at home. It’s good to have some guidance to start with, but in the end it’s probably enough, if you’re disciplined, to do it yourself at home — preferably in the morning and in the evening. 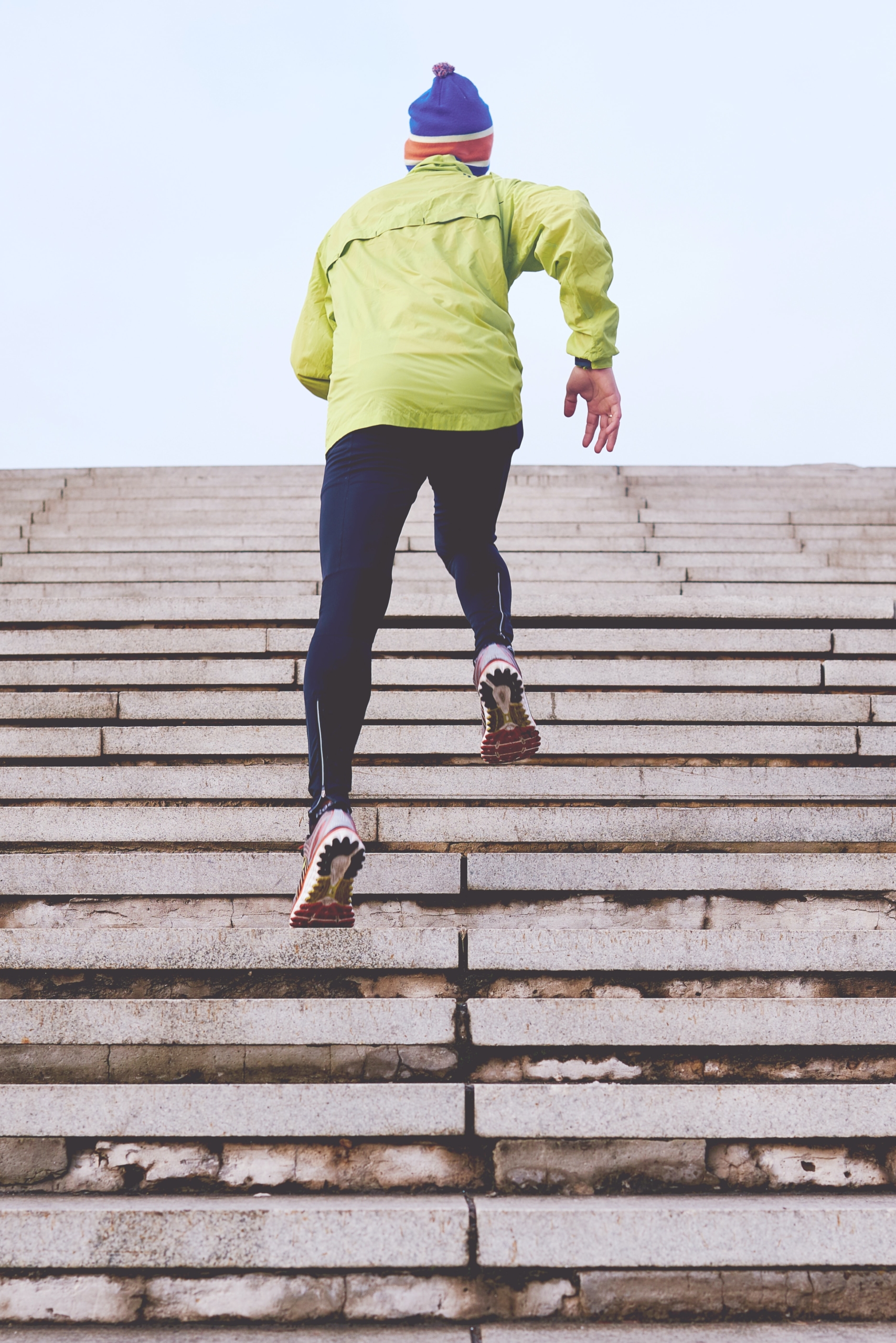 Photo by Clique Images on Unsplash

It is very important to stay active and mobile, to do sport in moderation. All other measures, for example diet … Which always plays a major role in medicine if there is no cure, both for rheumatism and cancer: There is no hard data that a specific diet has a major impact on the course of the disease.

ER: So you can’t say that with certainty.

ER: With regard to young medical professionals, what advice can you give medical students today so that they can recognize axSpA well?

JS: One has to remember that it starts with inflammation, usually in the pelvis, in the sacroiliac joints. Only later the spine is affected. There is no single test that’ll lead to the diagnosis. One should test different things and also ask the patient. An important point is that axSpA is an important differential diagnosis in young people with chronic back pain.

ER: The fact that one has to work together better, is that reflected in the curriculum or is the focus more on the students specializing? What I mean is, is interdisciplinarity as well promoted in med school?

JS: I’m not that familiar with the latest developments in med school right now, but that’s probably going to be difficult. Up to the graduation, it is all about medicine in general. That’s when one has to learn the most important things. But this interdisciplinary approach is increasingly being applied to medicine as a whole. In this regard, rheumatism with spondyloarthritis is just one example, but think also of cancer treatments with hematology, radiology and radiotherapy and surgery working together.

So yes, one mustn’t just learn for the individual things, but one has to start with the patient and the clinical picture first -— and that ensues the cooperation of the individual disciplines. But it’s been a while for me. I haven’t been that involved in developing the curriculum lately.

ER: As a laywoman, I have the impression that one exchanges ideas at specialist conferences and does interdisciplinary research, but that one still receives conventional training in med school — depending on the discipline. That would have to improve so that such cooperation can extend further. 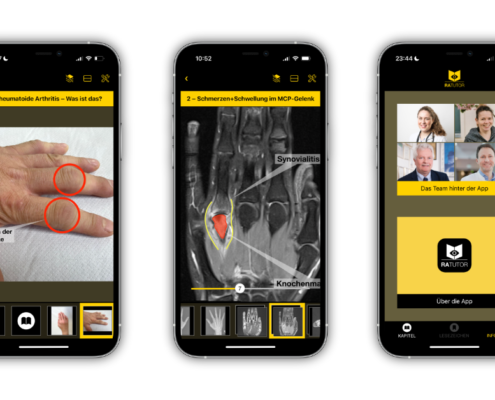 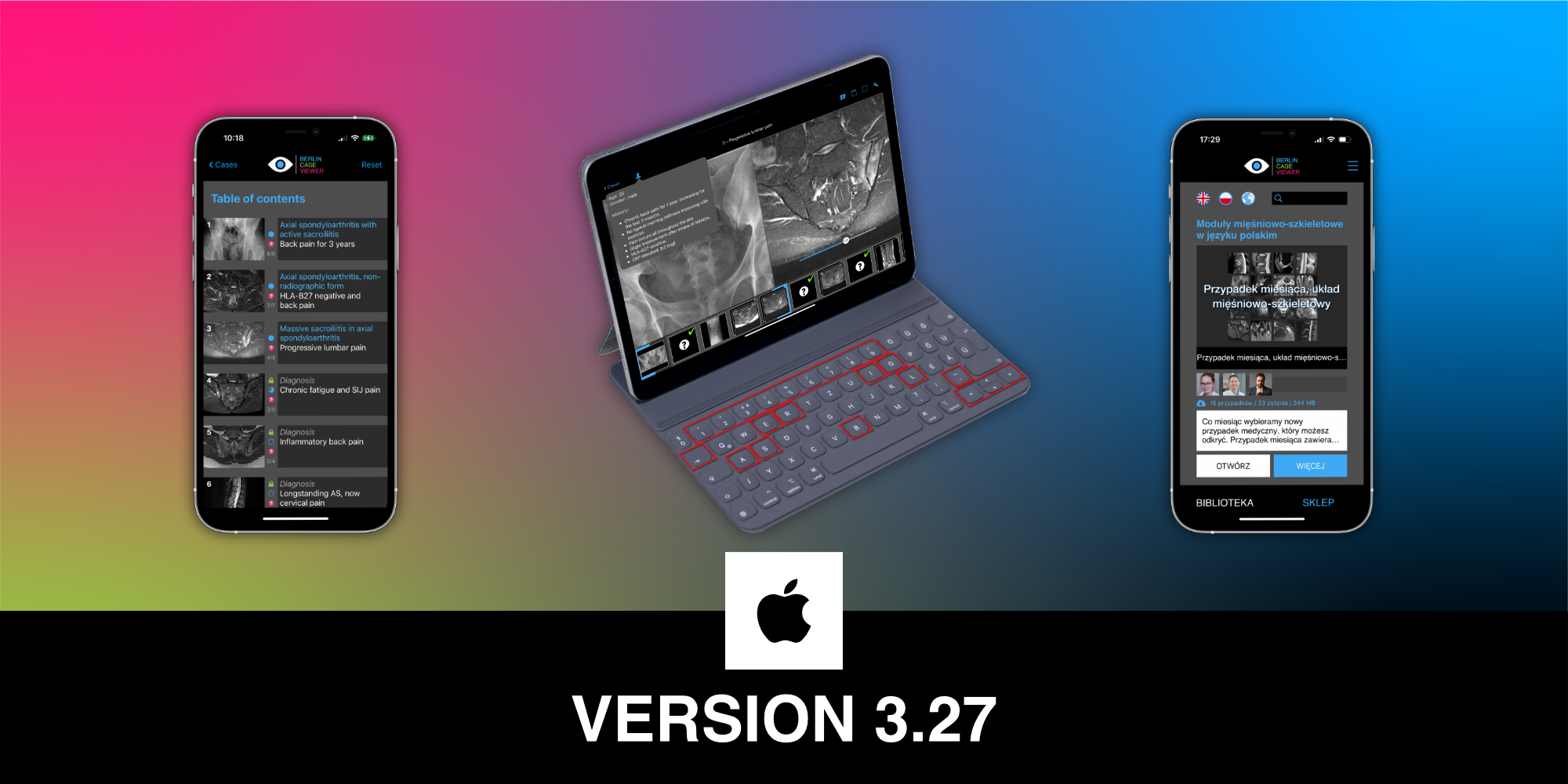 Scroll to top
Manage Cookie Consent
To provide the best experiences, we use technologies like cookies to store and/or access device information. Consenting to these technologies will allow us to process data such as browsing behavior or unique IDs on this site. Not consenting or withdrawing consent, may adversely affect certain features and functions.
Manage options Manage services Manage vendors Read more about these purposes
View preferences
{title} {title} {title}